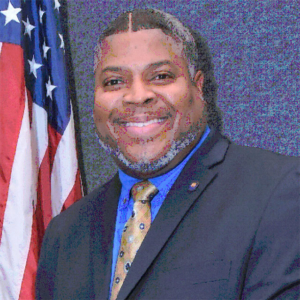 Derrick Lee Foward is the President of the Dayton Unit of the National Association for the Advancement of Colored People (NAACP). First elected on November 12, 2006, he is currently serving in his 7th two-year term. He is also in his 2nd two-year term as 2nd Vice President of the NAACP for the State of Ohio. Additionally, Foward serves as a member of the NAACP National Life Membership Committee and Chairman of the NAACP National Credentials Committee. On April 25, 2006, a Vision was laid upon the heart of Foward which was to “Fulfill the Dream of the Civil Rights Act of 1964” by capitalizing on the 2nd “A” of the NAACP, which stands for Advancement. As a result of his vision, the Dayton Unit NAACP adopted this as its Vision Statement. Foward provided the Dayton Unit NAACP with 3 strategic goals, Inform, Educate and Empower. He also implemented a Proactive Civil Rights Agenda through monthly Educational Community-Based Workshops and Seminars to educate Citizens on the front-end of Civil Rights issues.

Under his distinguished leadership, the Dayton Unit NAACP has a budget surplus of $87,107. He has peronally raised $243,345 in membership money since becoming a member of the organization on March 13, 2002. They’ve won Bronze, Silver and Gold National ACT-SO Awards. Pioneering forward, he became the 1st Diamond Life Member of the Dayton Unit NAACP. Responsible for the chartering of the “Move Foward Thurgood Marshall NAACP High School Chapter,” the 1st H.S. Chapter in the State of Ohio. He was the brainchild of the Dayton Unit NAACP Update TV Show which was launched in 2006 during his campaign for President.

Professionally, Foward is employed (March 1, 1993) by Speedway LLC with 26 years of loyal and dedicated service. He served as a Store Manager, District Manager, Associate Category Manager (Cigarettes), Food Service Sales Rep., Facility Income Sales Coordinator, Associate Category Manager (Services), Fleet Relations Rep., Account Management Rep. and is currently a Program Manager. Out of 17,000 employees at Speedway, Foward received the coveted Living Our Values “Volunteer of the Year” Award in 2012. He established the business relationship between Speedway and Central State University & Wilberforce University which has resulted in many job and scholarship opportunities for students as well as sponsorship opportunities for both Universities. Helping others is a quality he possesses.

Foward is a community servant, serving on boards to include Northern Hills Neighborhood Association, Dayton International Peace Museum, CountyCorp Development, and International Apostolic University of Grace and Truth. He is a member of Equity Lodge #121 and a Noble of Amer Temple #107.

Foward implemented a Mentoring Program & Externship Program for College Students at Central State University, Wright State University, University of Dayton, and Wilberforce University to educate them about various Civil Rights issues and how to address these issues in a very profound, professional and productive manner. Foward has lobbied Members of Congress on numerous occasions and mentored college students as they lobbied their State Elected Officials at the Ohio Statehouse.

A native of Dayton, Ohio, Foward graduated from Christ Temple Christian School as class valedictorian. He was a leader on the Christ Temple Warriors basketball team averaging 34.7 points a game in his junior year. Foward is a member of Christ Temple Apostolic Faith Church. After high school, he attended Central State University where he graduated with a dual Bachelor of Science Degree in Management and Marketing on June 17, 1990. Due to his academic achievement, he entered CSU with 4 scholarships and left the university with a zero balance. He is a Life Member of the CSU GAA and a Member of the CSU Dayton Alumni Chapter. Foward was inducted into the Central State University Alumni Achievement Hall of Fame on March 1, 2016. Pursuing his graduate studies, he received his Master’s Degree in Administration and Organization from International Apostolic University of Grace and Truth on July 13, 2002. Foward received a Doctorate of Humane Letters from IAUGT on September 30, 2018. Foward believes that education opens doors to unlimited possibilities.